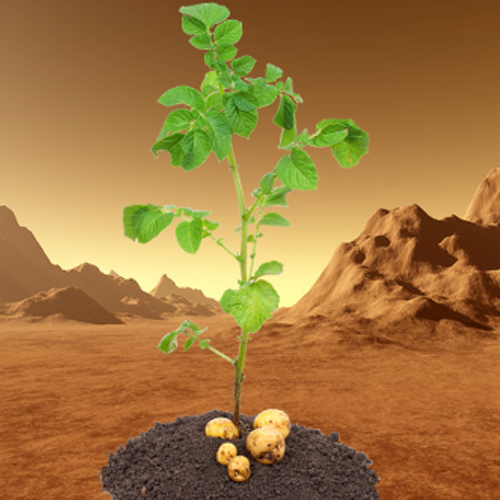 A fictional botanist-turned-astronaut is trapped on Mars in the 2015 hit film “The Martian,” prompting him to “research the s—-” out of his precarious situation.
Matt Damon’s character, Mark Watney, lives on Mars by fertilising the soil with his faeces, slicing potatoes, and planting the cuttings in the soil. This finally produces enough food for him to last for hundreds of days.

But farming on Mars might not be a far-fetched dream for much longer: the NASA-backed Potatoes on Mars project recently successfully grew tubers in Mars-like conditions, indicating that Watney’s feat is feasible.

NASA has been eyeing a crewed mission to Mars for decades, and Congress recently passed a bill urging NASA to conquer the planet by 2033. The organisation is also considering the possibility of establishing a Martian colony.

NASA and the International Potato Center in Lima, Peru, collaborated to create a tuber-growing experiment that mimicked the harsh conditions on Mars’ soil.

All takes place inside a CubeSat, a rocket-launchable box. Pumps, water hoses, LED lamps, and instruments are mounted on the CubeSat to simulate Mars-like temperatures, light cycles, gases, and air pressure.

According to a CIP press release, “preliminary findings are positive,” which means a potato plant developed in inhospitable desert soil under Mars-like conditions.

“If the crops can withstand the harsh conditions that we are exposing them to in our CubeSat, they have a strong chance of growing on Mars,” Julio Valdivia-Silva, a NASA researcher at the University of Engineering and Technology in Lima, said in a statement.

Is this something that could be done on Mars?
The experiment does not provide the absolute evidence that a potential Martian potato farmer needs.

For starters, the soil wasn’t brought back from Mars. Despite being arid and inhospitable, it was likely still home to microbes that could have aided the potato plant’s development.

Potato cuttings were also used instead of seeds in the experiment. This is a problem because preserving potatoes over months or years can necessitate heating under pressure, known as thermostabilization, or a blast of radiation. In a tweet, Keith Cowing, the founder of NASA Watch, said that this damages potato cells, making it difficult to grow plants from cuttings.

Several other studies, however, have shown that food can be grown in Martian soil and even more inhospitable moon dust, known as regolith.

In 2015, Bruce Bugbee, a botanist and NASA scientist at Utah State University, told Tech Insider that there was no reason why potatoes or other food crops couldn’t be grown in Martian soil. (However, he objected to Watney’s faeces being mixed into the soil, which he said could be “toxic to the plants.”)

The CIP, NASA, and other institutions are now monitoring how many potato varieties, including special varieties bred to withstand harsh conditions, perform in the Mars-like CubeSat box.

“We’ll run several rounds of tests to see the potato varieties perform best,” Valdivia-Silva said. “We’d like to know what the minimum requirements are for a potato to exist.”

Aside from assisting prospective astronaut farmers, the study would also support humans on Earth.

“The results show that our efforts to breed varieties with high potential for improving food security in areas affected or likely to be affected by climate change are paying off,” Walter Amoros, a potato breeder at CIP, said in a statement.

View GNSS Satellites Near You

US congressmen stress GPS timing is backed up